One item that no college kid can go without, a cell phone. But not everyone has the luxury of their parents covering a expensive monthly data plan. For those of us on our own alternative services like Straight Talk provide some incredible value.

How to Apply your Discount

If you’re having trouble finding where to actually use your discount then reference the image below. 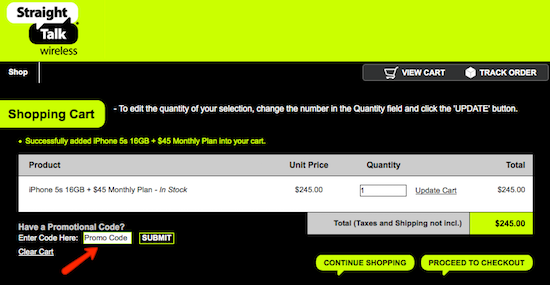 That’s it really, after you find the code that works you can check out for the discounted rate. Now that we’ve covered how to save a few bucks with Straight Talk, let’s dig more into how the company actually differentiates itself from the competition.

What is Straight Talk?

Straight Talk is a prepaid pay-as-you-go call phone service that offers several features that are often featured with contract providers such as T-mobile, AT&T, and Sprint. Likewise they have no credit checks, age limits, contracts, monthly bills nor activation fees. While the program is designed to work with specific phones (the website, while dependent on the location of where the phone will be most used, lists the Samsung Galaxy S, and the iPhone 4 among its best-selling phones), certain locations will offer the sale of just a SIM card to use with any mobile device. The most reliable vendor of their SIM cards, aside from the website directly, is the Wal-Mart superstores.

Can You Buy A SIM Card?

On their website, there is a section devoted to a “BYOP” program, allowing customers to bring their own phone and purchase a SIM card for use. The BYOP program costs $45 per month for the service, which is considerably cheaper than most mainstream wireless service providers, and the service accounts for unlimited text messaging, data use, and standard calls. If a customer opts for a BYOP option, they can also use the same phone number as their old provider, although that option is also offered through AT&T and Verizon as well.

Are There Any Limitations In Using Straight Talk SIM Cards?

For iPhone users, the BYOP option is useful only under certain conditions. While the SIM card will work with most iPhone 4 devices, it provides only 3G service, which, currently, is not at all useful in terms of reliability or speed. Despite its low cost (only $14.99) a SIM card will support any GSM iPhone, but not a CDMA-only phone that uses either Sprint or Verizon. Other common complaints about the service in regards to its use with an iPhone is the fact that it does not support Visual Voicemail, so there is some service loss.

One of the most glaring user-supported complaints relates to Straight Talk’s policy of limiting its “unlimited” service to 2GB of data usage per month. On a daily basis, that limit amounts to 100MB of use a day; any customer who violates that limit will then begin to receive messages warning of excessive use, and continued use will even result in termination of service. All the while the warnings and threats of termination occur, service speed decreases, slowing down service. While this would seem to undermine their policy of “unlimited” service and data use, the policy is defended as a means to “focus on trust and communication with customers”, and as a means of providing faster service. In addition, many customers find that 100MB per day is more than enough data for most surfing needs, particularly because of the much wider availability of free wi-fi that can pick up where data plans leave off.

Heavy data users or users who want to exploit the full use of LTE services might not benefit greatly. The other major caveat about using the service is the fact that users hoping to purchase a SIM card are expected to pay full price for their phones; current-generation cell phones can cost as much as $750, and if all the features the phone offers aren’t covered in the Straight Talk plan, it might not be ideal to use the program.

For light users, or users who are moderate in their data usage, Straight Talk might be one of the better options rather than committing to a plan with one of the more popular providers. While the service prevents any roaming charging, one of the many complaints regards the limiting of their data usage and the lack of usage of the Visual Voice Mail for iPhone users. Also, there tends to be some confusion during online purchases of their SIM cards: T-Mobile or CDMA-only SIM card purchasers might unwittingly and unknowingly buy the wrong card, and in unlocking the phone to install the SIM card may in fact void their warranty, rendering the purchase moot. These factors are not overtly advertised on their website or customer service, which tends to obfuscate the limitations of the service.

Overall, the service works absolutely perfect for low-use customers who tend not to use too much data, and who use Smartphones primarily for voice messaging, typical phone conversations, and data usage that falls below the 2GB monthly limit imposed by their services. For other users (particularly iPhone and next-generation Smartphone users), might be the better option rather than committing to a two-year contract with a wireless provider. Some research would do before making a purchase, but the website, and Wal-Mart customer service professionals, should be able to enlighten interested customers a to the benefits of Straight Talk.

Low-usage customer would definitely benefit from the company’s BYOP programs, but iPhone and next-generation phone users might not be able to fully enjoy the benefits of the pay-as-you-go program.